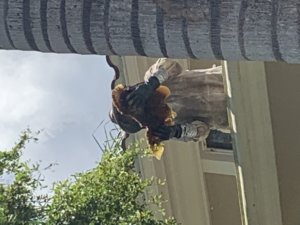 In 2020, two new species of giant Asian hornets were observed in the northwest Pacific. This suggests that these insects have managed to survive despite the control measures adopted last year.

This predator is known as the “killer hornet”. It was nicknamed so because of its propensity to catch a bee, bite the bee’s head and bring it home to feed young hornets. In a matter of hours, giant Asian hornets are capable of killing entire bee colonies. These insects can also be dangerous to humans. Keep reading to find out more.

What are Murder Hornets?

The Asian Giant Hornet is commonly found in Asia. This insect species is large and distinctive, with an orange head and an orange body with a black stripe. When the colony is disturbed, they defend their nests aggressively, as do most social wasps. But in most cases, you can limit the danger by not reacting in a provocative way.

Giant hornets have stings longer than those of a bee. Hornets do not detach from their stings when they sting. Since these stings can puncture thick clothing, it is advisable to avoid areas that are likely to be invaded by those insects.

The Asian Hornet is the world’s largest wasp species. An invasion of these insects into the United States could cause disturbance to bees who are killed to feed baby hornets.

More than 19,000 containers arrive at the country’s ports every day. U.S. inspectors only conduct random searches of the containers. It is likely that a fertile queen has managed to enter Canada through a shipping container. She would have created the colony that was discovered in late 2019. Only 2% of these containers would be analyzed. This is far too little to detect the presence of invasive species.

How to Remove Giant Asian Hornets on Treasure Coast?

Japanese beekeepers protect their hives from hornets by fencing them with wire mesh. American beekeepers are also trying to do so.

But there are also natural methods. Some bees are able to protect themselves from hornets by burning them. To do this, they wait for the hornet to arrive at their nest, and then invade it in large numbers. They surround the hornet with their whole bodies. At that moment, each member of the bee colony vibrates its wings. This raises the temperature of their respective bodies and the hornet heats up until it burns completely. The carbon dioxide levels in the honeycomb also increase during this process, contributing to the destruction of the hostile insect.

Who to Call for Bee Removal in Port St Lucie?

The destruction of nests is entrusted to professionals. It is no longer the direct responsibility of the fire brigade. As a general rule, the recommendation is to go through a private service provider in Port St Lucie.

Get in touch now!